The ‘Virgin River’ season 3 finale was a game-changer. HL spoke EXCLUSIVELY with Zibby Allen about whether or not Brie believes Brady, Brie’s trauma, and more.

Virgin River season 3 ended with Brady in handcuffs. Brie witnessed Brady getting arrested for the attempted murder of her brother. Brady professed his innocence, but does Brie believe him? That’s one of the many questions fans have after watching the third season.

HollywoodLife got EXCLUSIVE scoop from Zibby Allen about what was going through Brie’s head as Brady is taken away in handcuffs. The actress also opened up about Brie’s rape and finding an “ally” in Mel, as well as what season 4 could bring. Read our full Q&A below.

The season ends with Brady getting arrested for the attempted murder of Brie’s own brother. In that moment, there is so much going on. Brady swears he’s innocent. Where do you think Brie’s head is at? Is there a part of her that believes Brady?
Zibby Allen: I mean, that’s a very good question. I think it’s complex. They’ve been on a ride together. There’s a lot of interest. They do get involved. Brie is a really smart, take no prisoners type of character both from her work and also just being a part of the Sheridan family. I think that’s pretty much the Sheridan way. I think the verdict is still out, let’s leave it there. Needless to say, that moment is a shocker for her.

If Brady did shoot jack, that would be the final nail in the coffin for them. With everything that’s happened, do you think there’s a chance that these two could make it work? There’s a lot of chemistry between them.
Zibby Allen: The fans of the show, a lot of them have read the book. So there’s a lot of anticipation about where Brie’s romantic life will go based on the book. They’ve done a really good job at sort of deviating a little bit and pulling back in, so where Brie’s love life goes will be determined, but I do think that we got to finally see a side of Brady that we hadn’t seen in previous seasons. There’s a softer side and there was a connection between them that I think is really cool to see for both of them. Brie’s on her own journey, too. She’s got a lot to figure out before she can decide if she can even be in a relationship.

Brady tells Brie that he’s falling in love with her, and she doesn’t say it back. There’s still a lot for her to figure out, so is she even ready for that next step?
Zibby Allen: It’s understandable because you have Brie struggling with her own stuff. She shows up to Virgin River with her own kind of inner battle that gets revealed over the season, so to have her jump right into any romance right away would be skipping a necessary step for Brie to figure out what she needs next.

Brie opens up to Mel about what happened in Sacramento, and it’s a heartbreaking and powerful scene between them. Brie was raped by an ex-boyfriend. How did you approach bringing that into Brie’s story?
Zibby Allen: That’s a really heavy part of her story. I think it’s beautiful that Sue Tenney, the writer, gives Brie a great ally in that, which is Mel. Mel’s the perfect person for that. I think of anybody in Virgin River, those two women have the most in common coming from city life. I’m glad that Brie has Mel in Virgin River to sort of get to that reveal. That story is an important one to explore in general. It’s not just the guy that comes through the window and attacks the woman in the middle of the night, which is also a really valid story. But in Brie’s case, it’s one of those gray area sexual assaults. It’s somebody that she knew. I’m really proud to carry that part of the story and to watch her struggle through it. She struggled through what that did to her identity. She’s a lawyer, she’s really tough, she is hard-charging, and she’s used to defending victims not being one, as we know from previous seasons with Jack. As we discover with Brie, the Sheridans are not good at asking for help. They’re good at being independent to the very end. A lot of the season she’s trying to navigate this heaviness without needing to reach out for help. That’s a lot to carry internally, so we see her acting a lot of that out. I’m really impressed with the way Sue doesn’t make this a clean, easy-to-identify experience for somebody who’s coming off the heels of something like that. She doesn’t just show up to Virgin River and come apart. She’s really trying to fight through it and hang on to her sense of identity. I think that’s a really hard thing for Brie to do, but I think a beautiful thing to watch because it can be relatable.

Brie suffers a miscarriage as a result of that night. That’s another thing she has to process on top of the rape. Do you think she’s fully processed everything yet, or do you think she’s still actively working on coming to terms with what happened to her?
Zibby Allen: I would say there’s room to still come to terms with it. By the time a lot of Brie’s story is revealed it’s really towards the end season. It’ll be interesting to watch how the chapter of her coming to terms and healing unfolds for her next and what that does to her relationships in that town, be it with Mel or Brady, and how she navigates finally being on the other side of some of those big events. It’s true the miscarriage is another big story piece for Brie, and I’m really happy that I get to carry those two pieces of a story because there’s a universal component with women who face both of those things. It’ll be interesting to see how she comes through the other side with that.

At the end of the season, Brie is thinking about leaving Virgin River. Considering what happens in those final moments, do you think she’s going to stick around?
Zibby Allen: Obviously, I want her to as a fan of this show. Objectively, I never want to leave her. But we’ll see where she goes from here. I think there’s some real value in the fact that she could be honest with Mel and that friendship is just kicking off. I think those two girls have a lot more to explore in terms of their friendship. I know that, certainly now, Mel could use a girlfriend. I think it’d be a shame for Brie to leave just when she’s starting to form these relationships. I’ll be interested to see what Sue does if we’re lucky enough to get a season 4.

In your opinion, do you believe Brady? Or do you think he may have more secrets?
Zibby Allen: I’m just one person and that’s hard because how do you separate it at a certain point? I will say I was really pleased with Brady’s softer side that really came out through Brie. He has a lot of wonderful redeeming qualities. I think we see him now as more of a dynamic being as opposed to that guy who was really rubbing Jack the wrong way. I think he’s done a really good job at creating some big question marks about where we’re supposed to land with Brady, and my hope is that he ends up redeemed but we’ll see. He’s working through his own stuff.

There is still the mystery of who shot Jack. Do you have your own theory? Does anyone know?
Zibby Allen: We were constantly joking about it. At one point, there was a running joke that it was Brie who shot her own brother. And then we were like, no, it’s Ricky. The more preposterous we’ve got, the more fun it was. No one on set knows. It’s a big mystery to all of us, and it was a really fun game to play on set.

Automakers have battery anxiety, so they’re taking control of the supply – TechCrunch
1 min ago 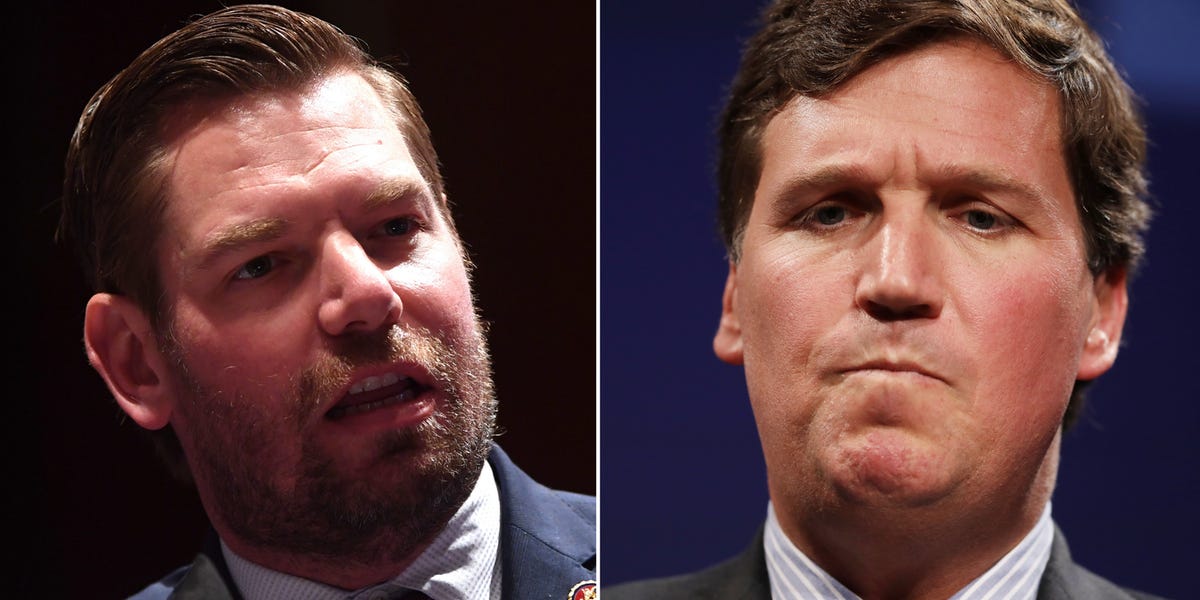 Rep. Eric Swalwell posted a heated text exchange with Tucker Carlson and said the Fox News host is ‘losing his mind that I won’t return his calls’
3 mins ago

Rep. Eric Swalwell posted a heated text exchange with Tucker Carlson and said the Fox News host is ‘losing his mind that I won’t return his calls’ Steam Deck order delay? The latest on reservations for the console that’s taking on Nintendo Switch
11 mins ago

Steam Deck order delay? The latest on reservations for the console that’s taking on Nintendo Switch